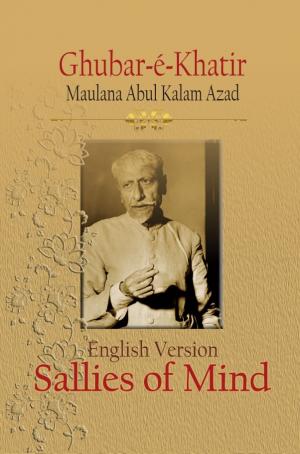 Ghubar-e-Khatir (Sallies of Mind) is the last of Maulana's writings and perhaps the most unique. Whereas his earlier writings whether journalistic or academic dealt with either religion or politics, here he takes leave of both the preoccupations and uses the solitude of political incarceration to give expression to his innermost thoughts on various phenomenon of life.

Not intended to be published when written but the published work shows that whoever persuaded the Maulana to allow publication deserves gratitude not only of his personal admirers but all those who care for flights of fancy rooted in erudition and close observation of human and natural phenomenon. The reflection on personal life provide a mine of information about his character which would prove highly valuable for a biographer; nowhere else the psyche of Maulana is revealed as intimately as here because it is a volume of uninhibited sallies of his mind. The account of his passage from an orthodox background to the wilderness of doubt and ultimate arrival at faith that transcends boundaries of sects provide enlightenment to the seekers of Truth and pave the way to respect for diversity. When he talks about his tea habit he throws a flood of light on the origin of the weed, its varieties as well as various tastes of tea drinkers. For him tea is not a substitute of wine but itself an intoxicating drink that transports him into the world of imagination where past, present and future merge into eternity.

There is rich stuff for lovers of plants and flowers and exceedingly rewarding information for those inclined towards music. His reaction to Aurangzeb's strong aversion to music would on the one hand warm the hearts of hedonists and on the other open the eyes of the kill-joys who think that pleasures and delights of the world of eye and ear are impious indulgence. All in all it is both delightful and instructive.

Maulana (Mohiuddin) Abul Kalam Azad, born in an Indian family at Mecca on 11 November 1888, rose to the front ranks of India's freedom struggle. He earned the respect of Gandhiji for his views on religion and politics that led to emphasis on communal unity as a necessary component of national independence. Maulana Azad started his career not as a religious or community leader but as a member of a revolutionary group. Later he was convinced of non-violence as a better instrument for political struggle and worked shoulder to shoulder with Gandhiji and Jawaharlal Nehru. Leaving the path of revolutionary violence he launched on journalism to create political awareness among Muslims who were at that time keeping aloof from national politics. According to him struggle for freedom was a religious obligation for Muslims. He played an important role in Indian National Congress of which he became president on two crucial junctures, first in 1923 when he saved its unity threatened by the controversy on council entry and later in 1940 when there was direct and final confrontation with the imperialist power.

In independent India he was Minister for Education in which capacity he promoted the setting up of various academic and cultural institutions. Apart from a politician Maulana was a writer with a distinct prose style marked by high level erudition and a poet's sensitivity to men and affairs. His Tarjaman-ul-Qur'an is one of the most authentic and intellectually stimulating interpretations of the fundamentals of Islam. Among his political writings Qaul-e-Faisal and India Wins freedom are significant as expressions of his views on politics.