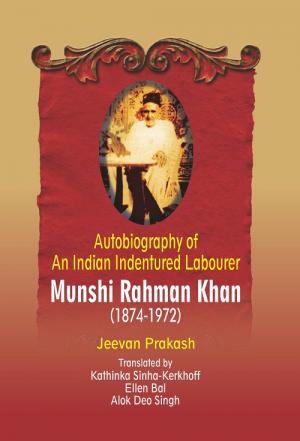 AUTOBIOGRAPHY OF AN INDIAN INDENTURED LABOURER

Rahman Khan (1874-1972), born in the village Bharkhari (Hamirpur, United Provinces), was 24 years old when he left for Paramaribo, the capital of Surinam (South America). At the age of 67, Rahman Khan, a practicing pathan Muslim, completed his autobiography entitled Jeevan Prakash in which he connects India, the land of his birth, with Surinam, the country in which he marries, is a contract labourer and later becomes a plantation overseer and a teacher in Hindi and Hinduism and gets five sons and two daughters.

There is almost no written information available that describes the lives of the first generation of Indian indentured labourers in Surinam. This translated autobiography, originally written in Devanagari, is therefore a unique source. This translation is accompanied by endnotes and a glossary.

Sinha-Kerkhoff and Ellen Bal have also added an introduction in which they place the autobiography in its Indian and Surinamese colonial contexts. The final outcome should interest labour historians and other social scientists as well as the common reader interested in colonial and subaltern history, transnational migration, diaspora and minority issues all well as issues of religion and communalism.

Ellen Bal (1967) is Assistant Professor in the Department of Social and Cultural Anthropology of the Vrije Universiteit of Amsterdam. She received
her PhD degree in 2000 from the Erasmus University Rotterdam with her study of ethnogenesis and group formation processes in South Asia, entitled They ask if we eat frogs. Social Boundaries, Ethnic Categorisation and the Garo
People of Bangladesh (Delft: Eburon 2000). Currently she is involved in a research project about the Indian diaspora in Surinam and the Netherlands,
and their backlinking to 'motherland' India, and works closely together with Dr. Kathinka Sinha-Kerkhoff

Alok Deo Singh (1967) is presently Monitoring and Research Coordinator with Alternative for India Development (AID), UK. Between 2001 and 2004 he worked along with Dr. Ellen Bal and Dr. Kathinka Sinha-Kerkhoff as a Project Officer in a Project on 'A Diaspora coming home? Overseas Indians re -establishing links with India'. supported by the Netherlands Foundation for Research in Tropical Countries (WOTRO), The Hague, The Netherlands. Related to this, Alok Deo Singh has carried out research in Mauritius, Surinam and in the Netherlands.