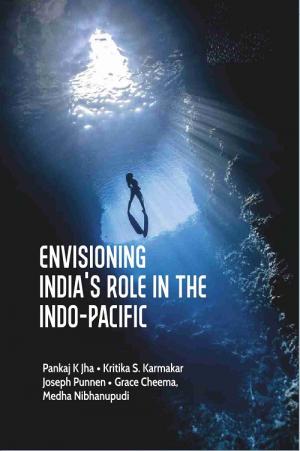 ENVISIONING INDIA'S ROLE IN THE INDO-PACIFIC

Ever since the launch of India’s Look East policy in 1992, India has come a long way in terms of the changes directed towards its extended neighbourhood and also subscribed to the new concept of the Indo-Pacific. In recent years, the Indo-Pacific region has gained a great deal of international attention. This research study looks at the recent changes and strategies initiated by the Indian government towards the Indo-Pacific region, along with the various economic, multilateral and bilateral relations that could impact India’s policies in the future. It also looks into the various regional forums India is associated with and how India shapes its policies according to their actions. This volume may be useful to all the stake holders having interest in the region.

Dr. Pankaj K Jha is Associate Professor and Associate Dean of Research, as well as the Director for Centre for Security Studies at the Jindal School of International Affairs, O.P. Jindal Global University. He was the Director (Research) with Indian Council of World Affairs for more than two and half years. He had worked as Deputy Director with National Security Council Secretariat (2012-2013) and was closely associated with national security apparatus in India.

Ms. Kritika Karmakar is Undergraduate student at O.P. Jindal Global University and Centre Coordinator at the Centre for Security Studies. She has worked on publications concerning terrorism, South China Sea dispute and the IndoPacific. Her research interests lie in the field of security and strategic studies, psychology and international relations.

Mr. Joseph Punnen, is currently pursuing an undergraduate degree in Global Affairs and is a Research Assistant at the Centre for Security Studies. His areas of research interests include various security issues across Asia and the Americas. He is also an avid follower of Global Politics, whilst working on a research paper based on Russia’s activities in the Arctic and its future.

Ms. Medha Mythili Nibhanupudi is Masters Student at O.P. Jindal Global University and was a Research Intern at Centre for Security Studies. Her research interest lies in the fields of non-traditional security issues such as energy security and humanitarian aid.

3. Outlining India’s Role in the Indo-Pacific